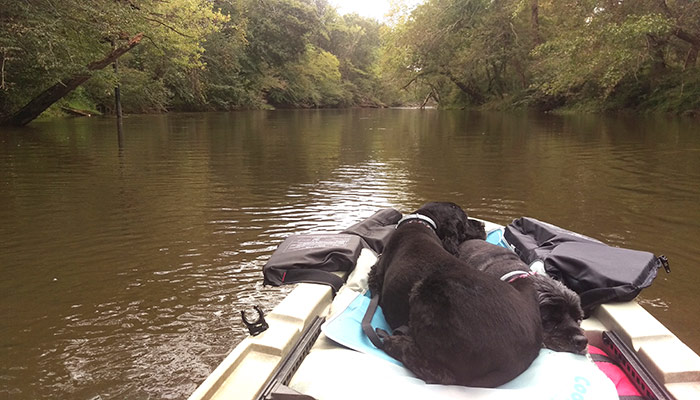 My husband and I started kayaking a couple years ago.

I floated down the crick* at camp when I was a kid, but I had never gone as an adult. We paddled around Lake Jordan and Lake Wheeler quite a bit. We started getting more into it. Last summer we went down the Neuse river in Raleigh and that was seriously awesome. We were hooked. It’s about a five hour float, depending on the current. The water is typically shallow and the current is sometimes almost at a stand still. You can float the Neuse all the way to the ocean. I’d love to do that, just need to make the time.

The summer before last we did an overnight camping trip down the Haw river. I was not so pleased with the Haw. I just got my kayak and there were a lot of big, sharp rocks. I had two dogs and a big cooler. We never flipped over, but it seemed like every minute I was stuck on a rock or hitting something. My kayak is an Ascend 12T Sit-On-Top. She’s a great, huge beast coming in at 77 lbs. It’s like paddling a barge, but you can’t tip it for nothin’. Let’s just say my shoulders hurt a little by the next morning. 😉

I loved the camping spot our friends knew about. Someone had managed to cart down enough wood and supplies to build a table, fire pit (with grate), benches, and left extra supplies like a rake and axe. A great little spot. We left some fire starter sticks in a zip lock and tidied up the camp before we left. We agreed some solar yard lights would be good to bring there so we can see better after sundown.

While she’s heavy, I wouldn’t trade my Ascend for anything (except maybe a lighter version). The removable lawnchair-type seat is the shit. It’s comfortable as f*ck. Your butt doesn’t sit in water all day. I can slide it out and use it at a camp site. All the other kayaks I looked at that had a real seat were thousands of dollars. I wasn’t interested in paying a ton of money for a kayak.

The other big reason I chose this kayak was because it has a wide, flat deck where I can put the dogs. When I was shopping around I noticed most kayaks kind of slant inward and are molded around the person’s body. I didn’t want dogs in my lap all day or on my legs. With the Ascend, I have a ton of room up front where I put padded dog beds and icepacks insulated in between for hot days. We had a dog once that had Cushings disease. We bought him a cooling bed that you fill with water. This thing makes a great padded bed that is made to get wet. I just don’t put any water in it (it has a thick pad inside of it). No two dogs ever had it easier. They don’t help me paddle or anything…

I bought Bass Pro’s Ascend 10T version to take to camp, but it tipped super easy. Everyone bitched about it on the reviews, but I wouldn’t listen… I exchanged it for the Sit-In version which is great. It doesn’t have quite as much room as the Sit-On-Top, but still has the awesome seat. I noticed Bass Pro says the 10T Sit-On-Top is new. They were supposed to be fixing the tipping issue on the 10T. Not sure if this is the real deal or not, but here’s the Ascend 10T Sit-On-Top Kayak. I would trade my sit-in for it if they really fixed the issue. So yeah, I can definitely say the Ascend kayaks are a great product for the money spent.

We like to get a group together when possible and hit the Neuse. Sometimes we’ll go both Saturday and Sunday if we have time. Lately I’ve been getting take out from City BBQ to bring with us. They have great party packs and options for a picnic. Their beef brisket is tasty. We pack everything up and hit the water. It’s like being at an amusement park, but way better. Not only is it free, but I didn’t have to stand in line for an hour to go on a ride that lasts five minutes. My kayak is so big it’s like I’m floating down the river on a tiny living room. We have waterproof bags for our phones and waterproof bluetooth speakers. Music all day long, chilling, and having good times. Music favs for kayaking: Mumford & Sons, Fleet Foxes, Jack Johnson, Traveling Wilburys, The Barefoot Movement.

*Crick is what we call a creek. Please see Patrick F. McManus’ “A Fine and Pleasant Misery” for a full explanation and comparison.

I have some favorite products for our outdoor activities to share with you. In trying…

Survival tips if you get lost in a remote location

People get lost. It happens. Getting lost in the woods or any remote place that…