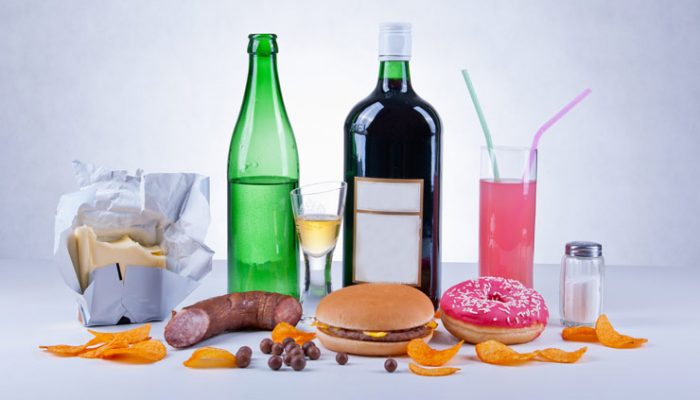 We used to eat real food.

Before World War II we ate virtually no processed food. We had food preservation methods like canning, freezing, dehydration, fermenting, etc, but nothing like the frankinfood we have today. Processed food came about because we needed to feed the Army, Marines, Navy, Airmen, military staff, and anyone else tasked with leaving the United States to go to Europe or the Pacific to fight.

In 1946 the Secretary of Agriculture, Earl Butz saw the potential of processed food. He wanted to capitalize on it with the American people. He told the farmers to get big or get out. They were urged to grow corn, soy, and wheat. These are cheap crops that are easily produced. The thing is we aren’t supposed to eat these foods in the manner in which we are. We’ll get into that in a minute…

Farmers started planting vast monocultures of these three crops. Monocultures are massive crops consisting of only one plant. Nature doesn’t operate this way. She is diverse. Monocultures create disease and imbalance. Having diverse flora helps all vegetation thrive. Some plants keep bugs away from other plants, some can provide shade for other plants that can’t withstand direct sunlight all day, and so on.

Once the insects started coming the farmers had to start spraying their crops. They had to buy gas powered tractors in order to keep up with the amount of land they had to till and maintain. Vast tracts of land were heavily sprayed and many farmers didn’t understand the importance of rotating their crops. The run-off of the pesticides from the crops goes into the soil. We then eat this food after it’s been broken down and sometimes altered to create a higher profit margin.

Corn was originally a smaller plant. What we eat today is actually a mutation. Corn syrup is derived from the corn kernel. It’s some pretty nasty stuff. Highly addictive. The body wasn’t meant to ingest this much of it. There is only a small amount of it in each kernel, which is ok for us to have. When extracted and consumed in large amounts it reeks havoc on the body. Corn syrup is in damn near all processed food.*

It’s time to dispel the big myth: We are only supposed to eat soy if it has been fermented. Yes, soy has a lot of protein. However, that protein is too dense for the human body to digest. So many people love edamame, soy sauce, and all the other processed foods that soy is added to. We are literally overloaded on this one and it is definitely not something we should be eating. It’s just cheap to grow.*

Another crop that is heavily abused and overused. This ties in with gluten sensitivity. Back in the day we used to soak our grains. Grains and some other foods have naturally occurring gluten in them. When soaked in water (sometimes with salt), an enzyme is released that neutralizes the gluten within the hull of the grain, bringing it down to a level that we can ingest without issue. The problem is that we do not soak the grains anymore. They are simply processed with all that gluten held inside. No wonder folks have gluten intolerance. Hell, it’s not even that some folks can’t have gluten, it’s just that they are literally overloaded on it. Almost anyone would develop a reaction at some point if they keep eating a shit ton of it. The thing to keep in mind is that most foods that normally would contain gluten that are labelled as gluten free means the product has been modified in some way to remove the gluten. Sometimes these methods involve nasty processes and toxins.*

The introduction of processed food was a hit and liberated U.S. housewives of the 1950’s. The demand was there. Cooking was cast aside as drudgery and they burned their culinary bras. Grandma’s old sprouted grain bread and fermented sauerkraut recipes were lost and we forgot how to really feed ourselves. When I started making things from scratch, I had to look up recipes for every day carbs like dumplings and pancakes, etc. I had only used Bisquick my whole life and had no idea how to do it from scratch. I had no clue about real bone broths, soaking grains and beans, or anything else I needed to know to heal my nervous system. Gut health is huge here!

We love to turn everything into a mass-produced, manufactured enterprise. Some things cannot be handled in this way and food is one of them.

Has anyone noticed that everyone is sick with something? Depression, cancer, autism, diabetes, and a myriad of other ailments that we should not all have. In just three generations of eating processed food, everyone is sick in some way. It’s not just a part of aging. Young folks shouldn’t have cancer. We have diet induced diabetes at a staggering rate. Depression is rampant…

Our bodies are REAL. When we eat fake food it doesn’t know what to do with that substance. It manifests the rejection by making us sick. Our bodies work like a car. If you don’t give it the right care it will break down. It might only be a small thing at first and the car still runs, but eventually it will break and be unusable. The car needs what it needs, as does the body.

I would much rather do this extra work in the kitchen than take a pill that could give me a whole host of other issues or possibly death. I am allergic to many man-made drugs and I tend to avoid them as much as possible.

If the objection is lack of money, think about the money that is spent just going to the doctor one time, then add prescriptions that are sometimes very expensive and taken for many years, or even a lifetime. Preventative maintenance costs less than getting sick. I’ve seen this with myself and with our dogs.

It is possible to heal yourself through diet and raising your scale of consciousness. THAT is the reality. I am living proof of this. Depression: GONE. Anxiety: GONE. Happiness: YES!

Below are some of my favorite resources on this subject. I hope you find the same success on your culinary journey to wellness. You can do this!