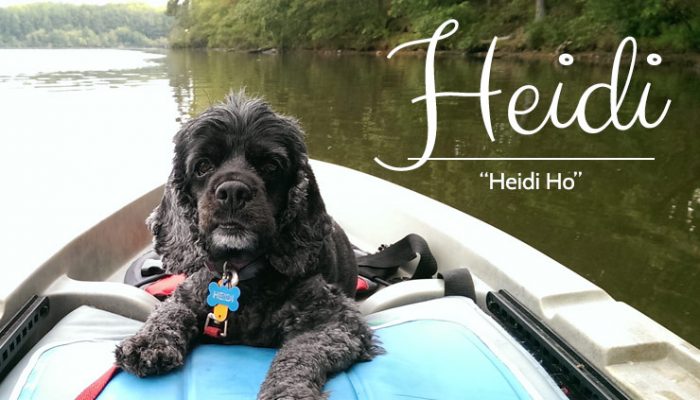 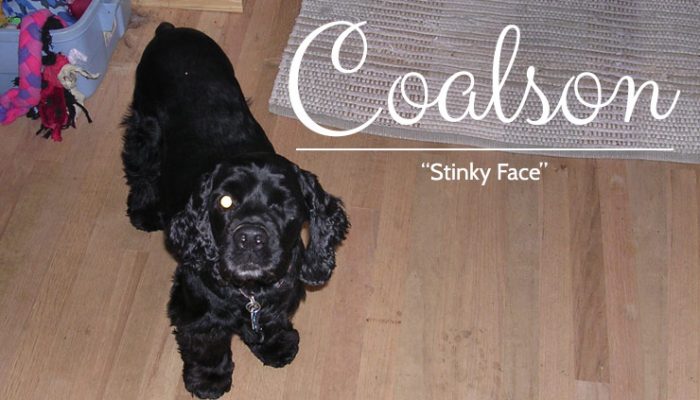 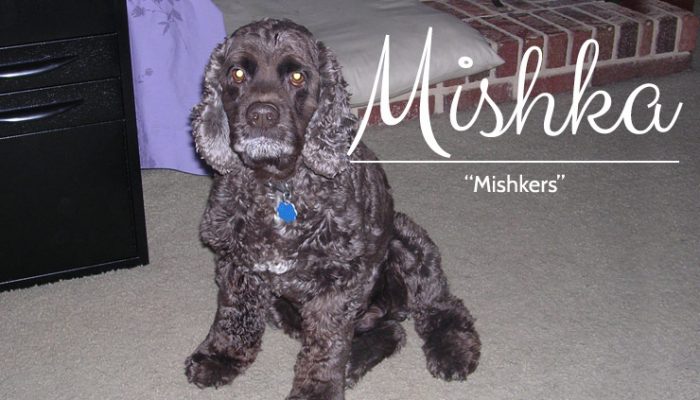 Caring for pets requires far more than I ever realized going into it.

I’ve had a dog in my life since I was five. I have a connection with dogs. I like them far more than most people (sorry, don’t take it personally). They are so loyal. So cute. So much work if you’re doing everything that should be done.

Perpetual sickness in our pack.

My husband had a Rottweiler named Tia. I had a chocolate Cocker Spaniel named Mishka. Tia had horrible gas all the time. It was really awful. She was a big dog and the gas was big, too… Mishka had chronic ear infections and itching. These were just the daily issues. Then there were all the other miscellaneous issues that arose singularly or occasionally.

Mishka was diagnosed with heart disease when he was ten. He had it for almost seven years. During this time I started giving them filtered water because I read about tap water giving humans heart disease. His heart was at a 4.5 on the scale and never got any worse after I stopped using tap water. I’m not saying that was the issue, but it certainly didn’t hurt to go filtered.

Mishka also had to have his gaul bladder removed. It ruptured and he almost died. He was 14 at the time. The doctors at the vet school said he only had a 50-50 chance of survival due to his age and the fact that most dogs don’t survive this operation at any age. I wasn’t willing to let him go. I didn’t care how much it cost. He made it and lived for almost three more years. I took him back to see the surgeon that did the operation to thank him. The doctor teared up because they just don’t get to see their patients survive this surgery. Mishka was almost 17 when I had to put him down. I sure do miss him…

During all this time, we got little Beau. He was a rescue from hurricane Katrina. He ended up getting Immune Mediated Hemolytic Anemia (IMHA) from a vaccination. He in turn developed Cushings disease from the steroid he was given to get rid of the IMHA. He ended up getting lung cancer. It took the vet school eight months to verify it was cancer (they kept wavering between a bronchial infection and cancer). At the time I didn’t have much money so I was also delayed in getting him there for all the testing they wanted to do. This weighs on me heavily because what if I could have saved him had I had more money?

Once we knew he had cancer, they gave him a month to live. They said they don’t give them a big dose of chemotherapy like we do with humans. They focus on quality of life. I asked what the success rate was for a cure. She said “Oh, we never cure them. Very rarely.” I wasn’t about to pay $250 per chemo treatment knowing it wasn’t doing anything except hurting him more. The vet school wouldn’t try super-dosing with vitamin C since they’ve never done it before, which the only known side affects are light headedness and thirst.

I found a vet that was willing to try it. Sadly, we were too late. The cancer had gone too long. I would still try it again, though. I’ve read a ton of research on super-dosing with liquid soluble vitamin C to treat cancer on humans. At some point, though it is too late. My husband was deployed at the time. He was gone for a year. Little Beau lived for almost exactly 24 hours after Derek got home. I just kept telling him that his dad was coming. We had a lovely 24 hours and then he died in our arms. It was one of the saddest times in my life. I’m tearing up as I write this just thinking about it. I tried so hard to save that little dude… 🙁

I’m still going to that vet because they understand the value of holistic practices. They don’t look at me condescendingly as I looked for natural alternatives to the poisons I’m expected to give my dogs by the rest of the world.

We already had Coalson by the time this all happened. He’s another rescue. He only has one eye. Something happened to him while he was feral. The rescue got him fixed up and now he lives with us. He hasn’t had too much wrong with him (other than his mouth smells terrible no matter what we do). I’m working on a homemade toothpaste that I’m testing now and will post about once I have results. Coalson came to us after I had already been trying to feed the dogs real food. He was only about four, so he’s spent a longer period of his life eating good food. He’s about 14 now and is just finally slowing down a little.

Our most recent addition is Heidi. She is from a puppy mill and was used to breed. They said she was about five or six years old when we got her. In that time a dog will have had around 10-14 litters for their ungrateful masters. She is incredibly afraid of humans. It breaks my heart. We’ve had her for three years and she is still afraid of us to some degree. We don’t know how she was kept, but we think it was in a lightless, soundless box. Most of the dogs she was rescued with had eye problems (which occurs when left in the dark and/or neglected). She didn’t understand things like wind, shadows, or sounds of any kind. She’s had some tumors removed from her nipples (onset due to breeding). Otherwise, she is in perfect health.

Dogs were not meant to eat processed kibble.

Just because it’s in the store doesn’t mean it should be used. Giving a dog kibble is equivalent to a human eating vending machine food every day, for every meal, for their whole life. They put a bunch of creepy stuff in there to “supplement” their diet. That way they appear healthy, but they really aren’t.

Most dog food has a lot of corn, wheat, soy, or other foods dogs shouldn’t eat. They tend to be allergic to these foods which can cause itching, weepy eyes, ear infection, or other issues. Some dog foods also contain things like ground up beaks and feathers, which hold no nutrient value and are body parts that dogs wouldn’t normally eat in the wild. Cheap leftover by-products are used as fillers to make dog food that has a higher profit margin.

A lot of dogs will stop eating their kibble, especially when it is left out for them to eat at their leisure. This is their bodies telling them they are having too much of the same thing for a long period of time. Their bodies are asking for something different.

After Mishka had his gal bladder removed, the vet school sent me a survey since I had a dog that lived through the surgery. They included a graph that showed a huge spike in 2008 of dogs having ruptured gal bladders and they were trying to figure out why. Look to thy food.

When I used to feed them kibble, we were at the vet like once a month. It was getting crazy. Allergies and all sorts of expensive shit going wrong.

I started looking into other ways to feed them, and us. That was about six years ago. Now we never have to go to the vet unless it’s for a yearly check up, a teeth cleaning, or occasional sickness from me feeding them a protein they can’t have (ear infection), or feeding them chicken and they get a bacteria infection (diarrhea). This happens maybe once a year now. Now that I’ve been feeding them raw for so long I know what they can have and what they can’t. I introduce new foods regularly. You don’t know if they can’t have it until you give it to them. By the way, dogs don’t get salmonella like humans. There are other bacterias they can get from chicken, but not this one.

Below are the foods that I give the dogs.

I try to mix things up as much as possible to give them variety. Dogs need a similar ratio of food as humans for a balanced meal: 40% protein, 30% carb, and 30% veggies. Be sure to give them a little water with the meal and mix it all together. If your pooch doesn’t like to drink water this is a great way to sneak some in.

I read an article the other day that dogs don’t need a carb. I’m not buying it. I have often wondered how they get carbs in the wild, because if I don’t give them enough they get diarrhea.

I also feed them twice a day instead of one big meal. They will get the most nutrition out of their food by eating this way.

Dogs can’t have an excessive amount of fat. They can’t eat as much fat as humans and can easily get Pancreatitis. Mishka had this quite a few times in his life from getting in the trash and eating huge amounts of fat. This can be fatal if not treated. These incidents combined with eating poor quality dog food for the first part of his life may have attributed to his gal bladder rupturing.

Adding a bit of Bragg’s Apple Cider Vinegar to their food is always a good thing. This keeps acid levels low.

I also give them a few sips of RAW milk (not pasteurized or homogenized) almost every day to give them a bit of fat since most of their meat is pretty lean. We are always adding new foods to the list.

Another great treat is giving them a real beef marrow bone with the marrow inside. They get valuable micro-nutrients here. Take care to monitor how much they get in one sitting. Too much can cause diarrhea (too much fat). If the bone is big, I will let them eat until I see a little less than a golf ball sized amount of the marrow gone. If your dog is bigger they can have a bit more of the marrow. Then I wrap the bones up, put them in the fridge, and give them back the next day. I repeat this every day until the marrow is gone. Then they can have the rest of the bone at their leisure.

Below are foods that are toxic for dogs.

– Yeast
– Alcohol
– Grapes/Raisins
– Onions
– Garlic (it is ok for them to have very small amounts – the health benefit outweighs the toxicity in small amounts)
– Sugar
– Human Toothpaste (specifically Xylitol)
– Chocolate
– Macadamea Nuts
– Pits of fruit (some fruit pits contain cyanide and dogs don’t know not to crack it open and eat this part)
– Rawhide (these aren’t toxic, but dogs have trouble digesting them)
– Corn, Soy, Wheat (not toxic but can cause allergic reactions)

Some people pick on me and some think I’m straight up nuts for doing all this. Hell, my own farmer thought I was crazy. I tell’em you can pay your vet a lot or your farmer a little. You pick.