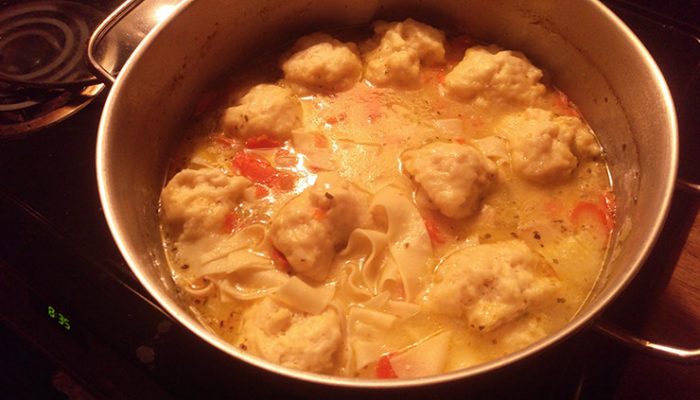 Homemade chicken soup is amazing whether you’re sick or not.

It’s not just the comfort factor of chicken soup that draws us to it when we’re feeling sick. It has a lot of beneficial components for boosting immunity. When slow cooked, the marrow is released from the bones and nutrients are more thoroughly broken down, allowing our bodies to fight the cold instead of digesting a big meal.

The amino acid, cysteine is high in chicken broth and helps flush out mucus. Chicken broth has a high mineral content, as well as cartilage and gelatin. These help your joints and digestion. The longer you cook it on a low temperature the more of these elements will be drawn from the bones. Once it cools it should become gelatin. The more jelly-like the broth the more vitamins and nutrients are present.

Dumpling recipe courtesy of my friend, Andrea Stewart. I double this recipe for large batches of soup.

Brine chicken with Kosher salt or Real Salt and white vinegar (vinegar optional) a few days beforehand if using organic, free-range poultry. Fill up large pot with the chicken broth and water. Put on high until boiling. Add chicken to boiling broth. Reduce heat to medium or so, cover, and cook until done. Usually about 1.5-2 hours. I cook it longer and on a lower temperature if I have the time. When the meat starts to fall off the bone it’s done. Remove chicken from broth and reduce heat.

You may need to add water to the pot as the soup cooks. I try to keep the lid on it to avoid evaporation.

Add sliced carrots, celery, onions, garlic, oregano (dried and/or doTERRA essential oil), salt, and pepper. I always go easy on the salt and keep adding as needed. Again, I suck at providing measurements. I only put like 1/2-1 clove of garlic in a 1.5 gallon pot of soup. You may want more. Cater to your likes.

If you’re using oregano oil be very careful. This is considered a hot oil and will burn the skin. It is also very strong. I put one drop in the pot of chicken soup, which is 1.5 gallons. If you’re making a smaller batch of anything, get a toothpick and dip it in the oil bottle and then swirl the toothpick around in your broth, sauce, etc. A full drop might be too much. Even with dried oregano it is easy to add too much. I give it a healthy dusting and then add more at the end if needed.

Allow chicken to cool. Debone and put all meat back into broth. Increase heat to a boil and add noodles. Mix up your dumplings and spoon them into the boiling soup. Cover and cook for 7-10 minutes.

Macaroni and cheese tends to get a bad rap. Typically when we think of mac…